Legal and affordable streaming music for small to large businesses.Start Your Free Trial Now
We use cookies to improve functions and performance for an optimal site experience. By closing this banner you consent to use of cookies.Ok, got it

What drives lyrical ingenuity in American popular music? Perhaps political turmoil produces poeticism: In the ʹ60s and ʹ70s, artists voiced their opposition to the Vietnam War with unprecedented eloquence. Alternatively, creativity may thrive in conditions of economic scarcity. Rap’s legendary wordsmiths have long derived lyrical gold from urban poverty, while the bards of blues and country have perfectly captured working class concerns. Or maybe it’s just an existential mood: In the ʹ90s, grunge icons articulated angst with unrivaled intensity.

Whatever the cause, periods of lyrical originality seems to reflect something essential about the broader culture. So when we consider the artists currently topping the charts, what does their lyrical inventiveness (or lack thereof) reveal about us?

We set out to study the lyrical landscape of American music over the last decade, analyzing songs from Billboard’s “Hot Songs” Year-End charts from 2008 to 2018. Our aim was to gauge the variety or simplicity of top artists’ lyrical styles, tracking how often they use distinctive words as opposed to repetitive terms and tropes. Our results suggest which artists are playing it safe with their verbiage and which musicians are striving for something more.

Are we currently in a period of lyrical stagnation, with top artists simply recycling content? Or do some of today’s stars do justice to the legacy of American songwriting, telling complex tales in their tunes? Take a look at our results and decide for yourself.

Highs and Lows of Lyrics 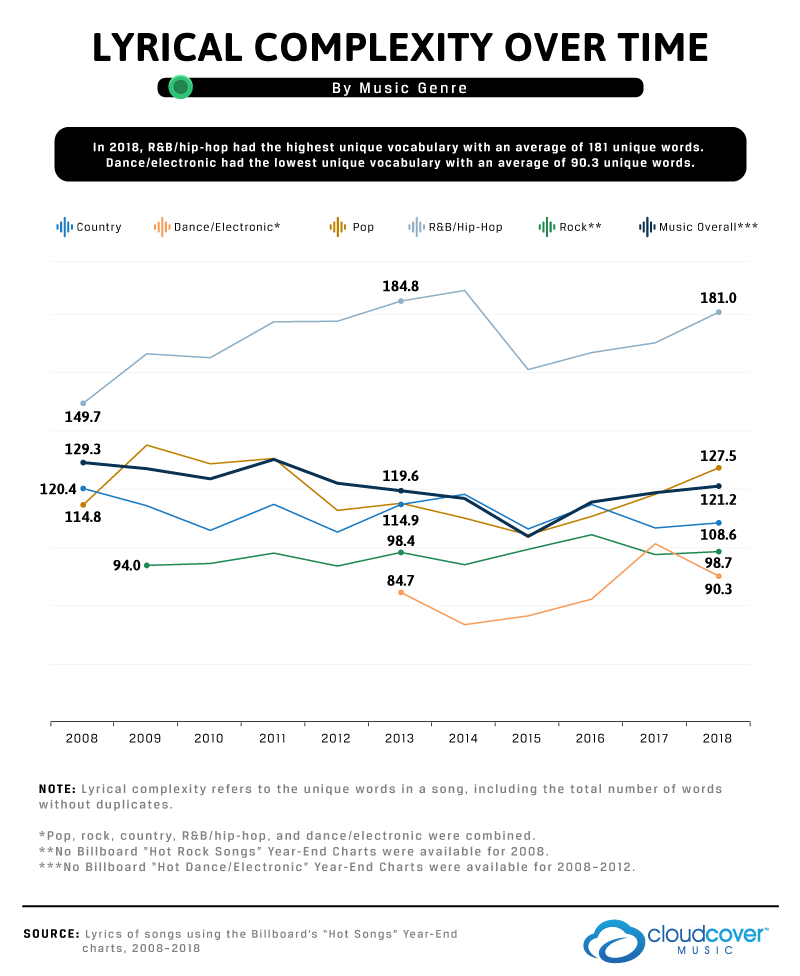 Over the last 10 years, the reading levels of songs across all genres have remained relatively the same. In 2008, R&B/hip-hop had the greatest lyrical diversity, and continued to remain well above the other genres and music overall in terms of verbal originality. In fact, 2018’s second-highest music genre, pop, trailed behind R&B/hip-hop by around 54 unique words.

From 2013 through 2016, the genre with the greatest degree of lyrical simplicity was dance/electronic music. It rose above rock music in 2017, but dropped to the last place again in 2018. In 2013, dance/electronic had just 84.7 distinctive words, which dropped to 73.6 in 2014 and slowly made its way back up to 90.3 in 2018. This dearth of lyrical diversity over the years may be due to the style of the music, rather than a lack of creativity on the lyricists’ part. While lyrics are a huge part of most songs, dance/electronic is more focused on the beat of the song and getting people to dance. 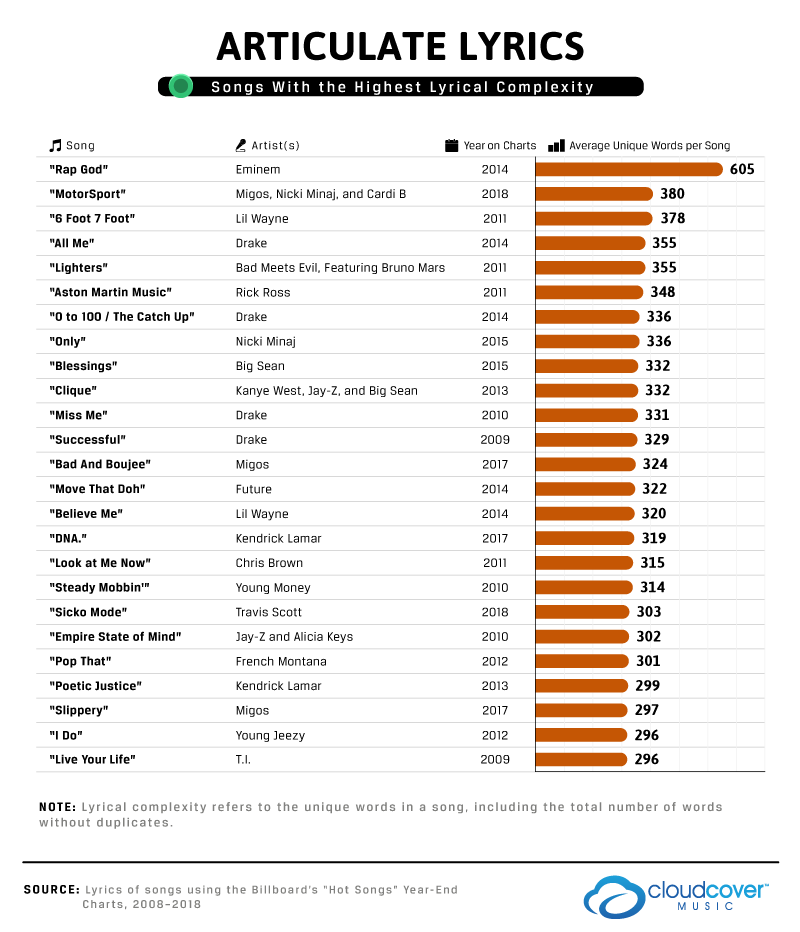 When looking at the songs with the greatest use of distinctive words, the degree of lyrical inventiveness more than doubled between the first and last song on the list. “Rap God” by Eminem, which placed on the charts in 2014, had the greatest number of unique words with 605. While no other Eminem songs topped the charts, the songs with the most lyrical originality all seemed to fall under the R&B/hip-hop genre. Eminem’s “Rap God” was distantly followed by “MotorSport” by Migos, Nicki Minaj, and Cardi B, which had 380 unique words.

As Hip-Hop artists begin to explore the more controversial topics of today’s society, the lyrics of the songs are bound to get more sophisticated. The stereotypical rap songs strictly discussing money, sex, and drugs still exist, but Hip-Hop legends like Jay-Z have been releasing more mature material, discussing real-life problems and personal stories. That doesn’t mean not-so-serious Hip-Hop songs aren’t filled with lyrical dexterity. However, it is likely playing a role in the entire genre’s move towards more sophisticated and inventive lyrics. 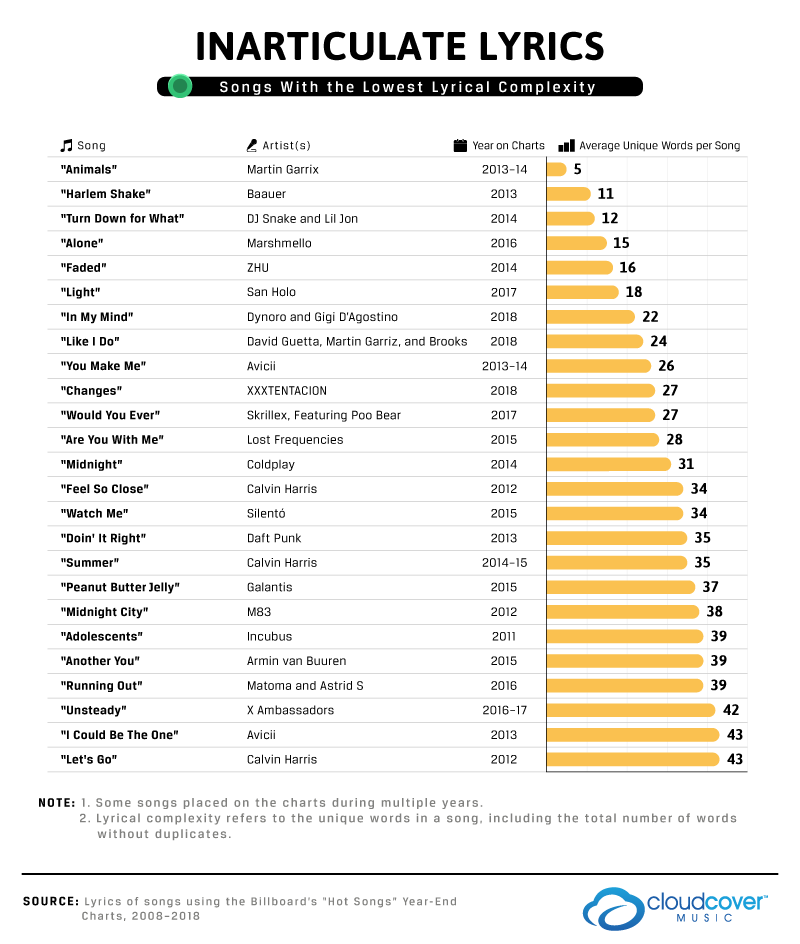 While many of the songs analyzed had well over 200 unique words, there were a lot of songs containing fewer than 50. The song with the least lyrical complexity was “Animals” by Martin Garrix, followed by “Harlem Shake” by Baauer and “Turn Down for What” by DJ Snake and Lil Jon, respectively.

Considering that these three lyrically unvaried songs all belong to the genre of Electronic Dance Music, or EDM, their low score makes sense. Each of these songs relies heavily on the beat, with Martin Garrix’s “Animals” only repeating one line of lyrics twice throughout the entire song.

It’s difficult to add distinctive lyrical content when there are only two lines making up a song, but songwriting ingenuity has not been the main focus for EDM artists. However, just as all music does, the genre of EDM is evolving. With EDM albums falling behind pop and Hip-Hop albums on top charts, artists have begun to shift their focus and bring lyrics to the frontline. 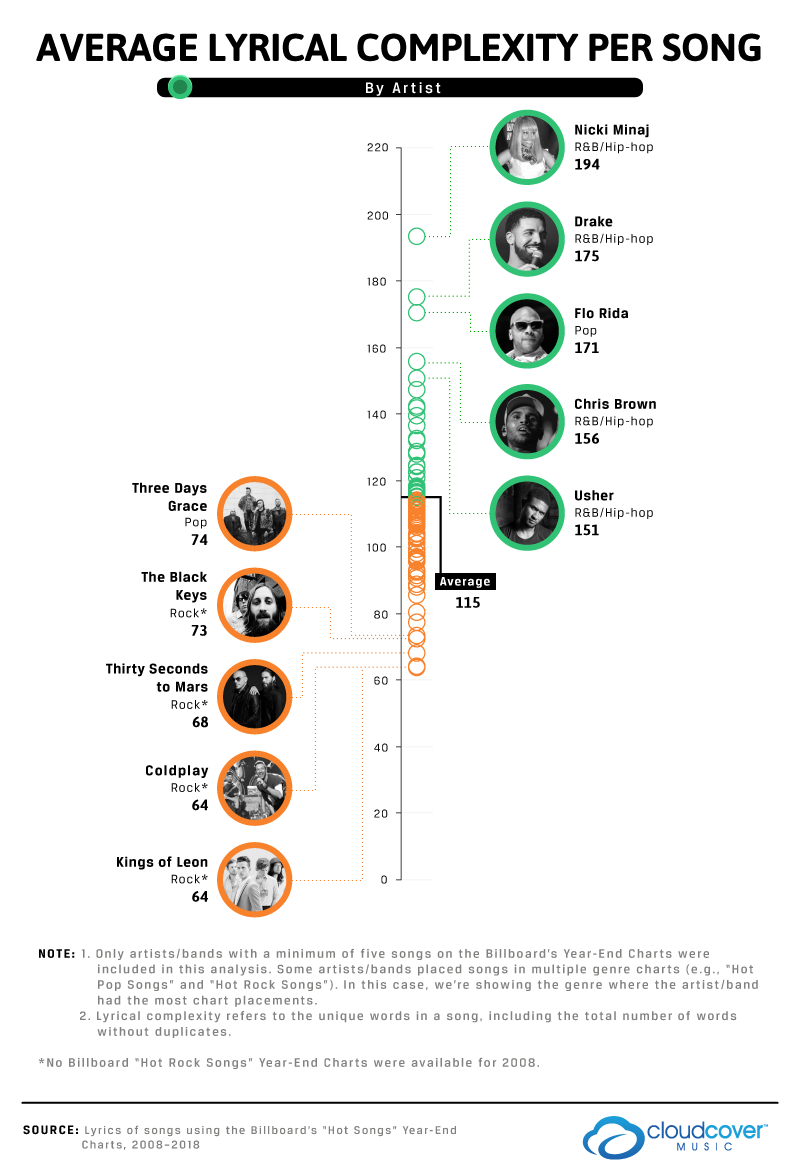 A single song’s lyrical diversity may say more about the individual track than the artist, so how do artists measure up overall? Nicki Minaj was the artist with the greatest level of lyrical range. Her songs combined had 194 unique words on average, followed by Drake with an average of 175 unique words. Rapper’s lyrics are often heavily criticized, especially by fellow rappers regarding authenticity of rhymes. While Nicki Minaj has stood by her lyrics and claims them as her own, Drake has been under fire numerous times for using a ghostwriter. But regardless of the origins of their rhymes, our findings suggest that these artists are releasing songs that are more lyrically inventive than the rest. 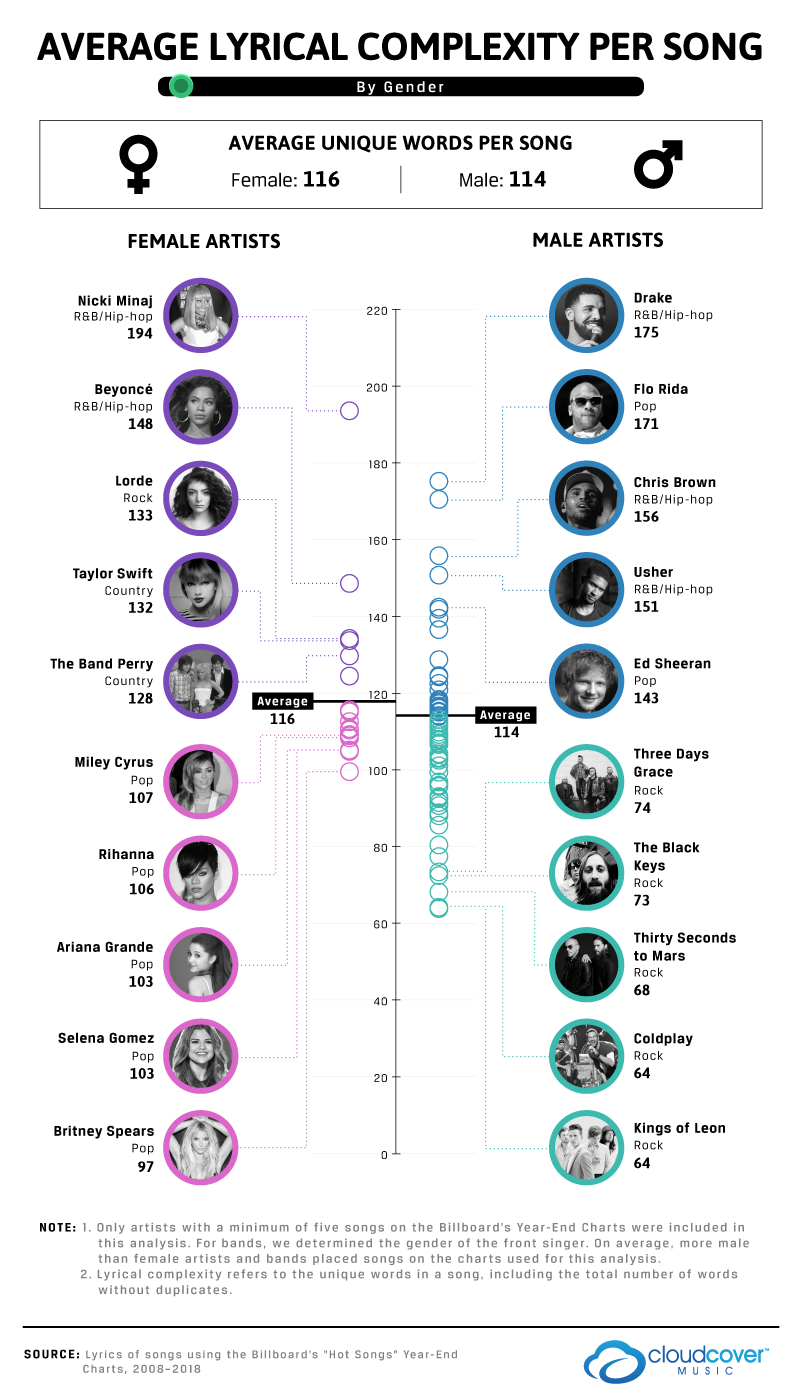 Even though, on average, our data concluded more male than female artists placed hits on the Billboard charts, the female artists tended to demonstrate more lyrical range than their male counterparts. Nicki Minaj, Beyoncé, and Lorde made it to the top, whereas Britney Spears had the least distinctive lyrical record. In the music industry, women are heavily outnumbered by men in nominations for awards, top songs, and as songwriters and producers. While there are 49 men to every woman in the songwriting and producing sector, songs by female artists are still lyrically more inventive on average than songs sung by men.

On the other side, Drake, Flo Rida, and Chris Brown, were among the male artists who stood out from the rest. Interestingly, the artists with the lowest rates of lyrical originality happened to be rock bands. Coldplay and Kings of Leon again tied for the least original lyrics, with just 64 distinctive words apiece. 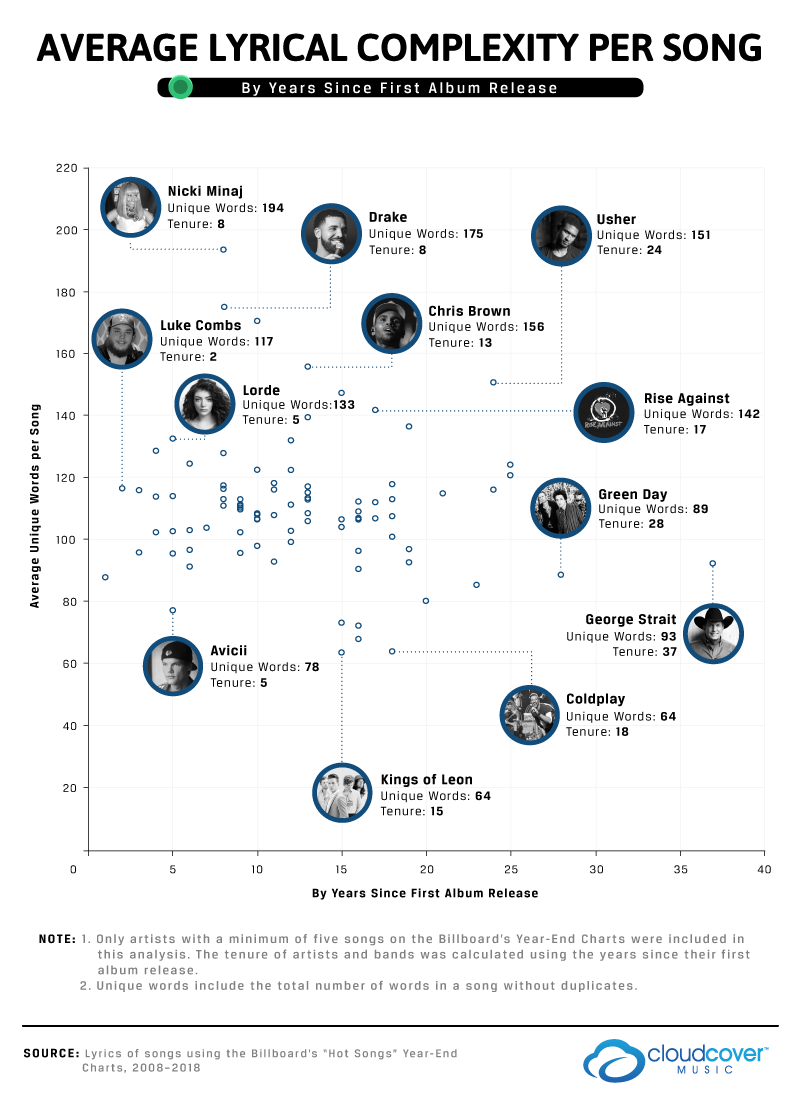 Decades in the music industry may get you inducted into the Hall of Fame for your genre, but does experience influence artists’ lyrical approach? It turns out, not so much. George Strait has been in the game the longest (37 years since his first album release) but demonstrated very little lyrical diversity. Nicki Minaj, who took the top spot for lyrical ingenuity, has been making music for only eight years since her first album release. Accordingly, it seems clear that the amount of time an artist spends in the music industry does not necessarily diversify his or her lyrical content.

It’s easy to complain about an ongoing decline in lyrical complexity: Baby Boomers can wax nostalgic about rock’s great songwriters, while classic hip hop fans yearn for the verbal fireworks of Jay-Z and Nas. Yet our findings indicate no great collapse in lyrical content over the past decade. In fact, the lyrical originality of chart-topping songs and top artists remained relatively static over the 10-year period we studied. Whether artists are writing their own songs or collaborating with other songwriters, the level of sophistication hasn’t plunged precipitously. Moreover, many would argue that repetitive terms don’t make current hits any less enjoyable.

Whether you enjoy songs that are lyrically inventive or comfortably familiar, listening to music should be hassle-free. At Cloud Cover Music, we provide thousands of songs across all genres and customized playlists so that your business can play music without the risk of getting fined. Unlike popular music streaming services, all of our music is 100 percent licensed and legal to play in commercial settings. Visit us online today to try it out for free.

The gender of bands was determined by the lead singer. Tenure was calculated using the year the first album was released.

No statistical testing was performed on the data.

Do you want to educate others about these findings regarding song lyrics and music? The graphics and information found on this website are available for noncommercial reuse. Feel free to share them as much as you’d like across the web and on social media, but please make sure to link back to this page. Thank you!

TRY IT FREE NOWTALK TO SALES

How can we help you?

All plans include Public Performance Licenses for: